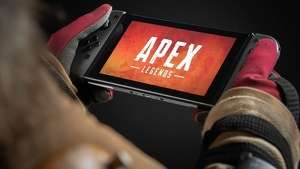 Over the past few days I’ve been playing Apex on my Switch, primarily docked using Joy-Cons, and I’ve spent most of it wishing I was playing on any other platform. For me, the main problem is the visuals – everything feels incredibly blurry, ranging from skin textures to enemy outlines. On Switch, Apex officially targets a resolution of 720p in docked and 576p in handheld, with a frame-rate of 30FPS in both. Yet even without an FPS counter it’s obvious that the game is frequently running below 30FPS, with significant frame-rate dips during gunfights. Not so great when you’re being shot at. I initially thought the frame-rate and blurriness problems might be limited to handheld, but sadly the docked mode doesn’t fare much better. I’ll be interested to hear what Digital Foundry has to say about this, so stay tuned for their verdict.

The other key problem with the Switch port is that Apex – a game known for its fast pace, snappy shooting and movement – really doesn’t translate all that well to Switch Joy-Cons. The default settings make aiming feel wild and uncontrolled, with players resorting to strafing and shooting in a straight line (more than usual). It creates some fairly comic moments, but perhaps not the shooting experience you’d normally expect from Apex. Navigating inventory menus with a cursor can be slow and awkward (seemingly more so than on other consoles), while sliding and jumping feels difficult. There were always going to be compromises when porting this game, but it’s a shame that the zippy feel of Apex has been lost in the process. This is definitely a game for the Switch Pro controller, if you have one.