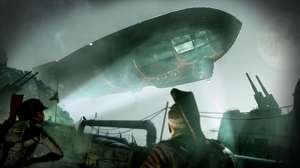 Developer Rebellion is bringing the second season of its undead shooter Zombie Army 4: Dead War to a close today, 19th January, with the launch of Dead Zeppelin, the third and final instalment in its Death from Above story campaign.

Dead Zeppelin, which follows on from Season 2’s debut episode Damnation Valley in October and Alpine Blitz in December, sees players boarding an undead airship to thwart the zombie army’s evil plans. You can catch a glimpse of the ensuring carnage in the launch trailer below.