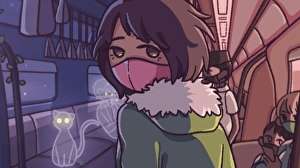 What Comes After is a game themed around death, with themes of suicide.

Bertie: I never realised how wise babies can be. When the baby on the train told me it’s not that babies don’t understand adults, it’s the other way around, I felt as though I’d been hit in the face with a profound baby toy. I’d never really thought about it like that before. I always assumed they were the ones who needed teaching – but do they? They seem pretty happy and content with their lot. It’s only in the many ways adults complicate things that life becomes more, well, complicated.

This is What Comes After; this is the way the game makes you think. It is a game about life, about reflecting on a life, and waving away all the complexity to enjoy simply being. It’s the story of a young lady called Vivi who has lost her way a bit, and one night on the way home from work, on the train, she falls asleep. She literally drifts off, and she finds herself on a spirit version of the same train. A train taking spirits to… what comes after. What follows are many conversations with the once-living on their final journey, and the nuggets of wisdom they have to impart.