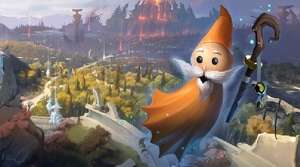 In my first ever game of Dota 2, all my friends started laughing at me when I bought two sets of a boot from the shop. “What?” I said. “You need a pair of shoes…”

If you hadn’t guessed from that anecdote, my friends (though trying their best) were not the best Dota 2 teachers, and I bounced off the game pretty quickly. But Valve is now attempting to make the game far more beginner-friendly, introducing several significant features to help new players learn the ropes – along with some tools to help returning players. Oh, and it’s cracking down on veterans trying to sneak into beginner pools using smurf accounts.

The update coincides with the launch of the Dota: Dragon’s Blood anime on Netflix earlier today, which will likely inspire a lot of viewers to try their hand at the game. Valve explained in a blog post that “the first steps of Dota discovery sometimes feel overwhelming,” and it wants today’s update to help with that.