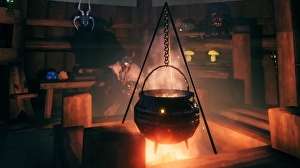 I have a confession to make: despite Valheim ostensibly being about hunting down terrifying monsters, I’ve instead become obsessed with making huge piles of food. I’ve even created a “snack shack” on my server so my friends can grab food on the go, and I regularly drop supplies in to keep it well stocked.

Food is seriously important in Valheim – it’s vital for maintaining your health while roaming through dangerous biomes, and it’s particularly important for boss battles. The snacks are often quite a challenge to make, requiring a mixture of farming, hunting and gathering to acquire the necessary resources, and you can’t just load up on one type of food: your Viking needs a balanced diet to stay happy. All of this, I think, means that making a stack of sausages feels hugely rewarding in Valheim… once you stop thinking about the origins of the entrails.

But what if there were more recipes, using a wider variety of ingredients, and requiring several stages of prep? That’s where the Master Chef mod for Valheim comes in. Made by hrve and available on Nexus Mods, the mod adds 25 new recipes to the game, and even introduces some previously non-edible items as recipes.