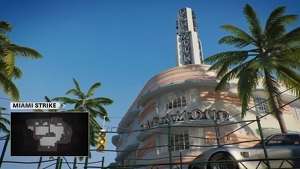 In a tweet video, below, Treyarch unveiled Miami Strike, which launches next week in multiplayer with a new 6v6 close-quarters layout and a 24/7 playlist.

The first thing you’ll notice is Miami Strike is set in the daytime, whereas the original Miami is set at night. This is significant because one of the chief criticisms of Miami has to do with its poor visibility due to the dark.