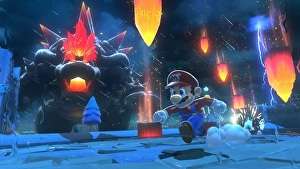 It’s been what feels like a few minutes since the last one but eBay is back with another voucher code that can get you 15 per cent off upcoming Switch exclusive Super Mario 3D World and a number of PS5 games.

Once again, the majority of the console game offers are available at the Boss Deals store, though other gaming and tech retailers are included in the promotion if you want to look elsewhere for some other bargains. The likes of ShopTo, Hughes Direct and The Game Collection are usually worth a look. To get the discount, all you need to do is enter the code ‘PURCHASE15’ at the checkout.

Your first stop should be ShopTo, where you can get Super Mario 3D World + Bowser’s Fury for £38.24. This is the cheapest price we’ve seen the updated Wii U platformer and its brand new expansion so far ahead of launch next Friday. Martin’s already spent some time with the new content in Bowser’s Fury and believes it to be one of the weirdest entries in the series yet.