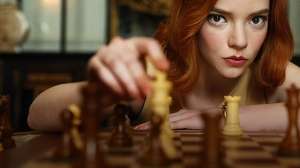 This piece contains spoilers for the entirety of The Queen’s Gambit.

A confession: I am quite terrible at chess. I do know the rules, but none of the strategy. None of the game. Nevertheless, inspired by the thrilling chess sequences of The Queen’s Gambit, I booted up the chess program pre-loaded on my laptop, positioned the difficulty slider quite generously to my advantage… and lost a bishop within seconds. I’m not sure how it happened. It was there one moment, and then it was gone, like a magic trick. But no matter: poor chess ability is no barrier to your enjoyment of The Queen’s Gambit. Not because there isn’t much chess in it – there is! It’s just that while the surface of the show concerns itself with the particulars of chess, what it’s really tapping into is something far more universal. Namely, play.

In his seminal work of game studies Homo Ludens, historian and cultural theorist Johan Huizinga argues that it is not wisdom that defines humanity, but rather play. I came across Huizinga while reading another book, GAMISH: A Graphic History of Gaming by Edward Ross, which is not only a great introduction to game studies but contains a wonderful potted history of chess. The game has been with us in one form or another for over 1400 years and travelled the Silk Roads to become what Steven Johnson calls “one of the first truly global cultural experiences”.