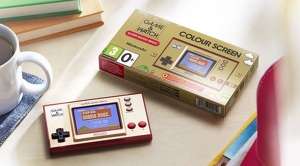 10th March is Mario Day. Or to give it the correct branding ‘Mar10 Day’ – you see what Nintendo did there? To get in on the celebrations, Currys PC World has dropped the price of the Game & Watch: Super Mario Bros to just £30.

The retro handheld throwback launched at the end of last year for £45 as part of the jolly red plumber’s 35th-anniversary shindig.

On it, you can play Super Mario Bros, Super Mario Bros.: The Lost Levels and a Mario version of the classic Ball game. The Game & Watch also functions as a digital clock with 35 different animations and a few neat little easter eggs. If that’s not enough of a selection, some enterprising folk have also got Doom running on it.