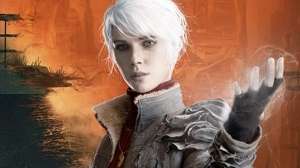 Death is everywhere here. You can feel it. You can smell it. I know that makes no sense – how can you tell that from a video game? – and yet you know that’s what it smells like, a muddy, earthy, cloying scent that sticks in your throat as you tiptoe across the razor-thin edge between Here and There. Light and shadow. Life and death.

Fungus blooms everywhere and doorways quiver, blanketed with a thick, terrible, alien skin. Later, arms will hang down from the ceilings and shattered bones will jut out of the ground. Later still, the entire world will be soaked in a blood-red filter as you scramble up mountains of paperwork and giant, haphazard filing cabinets.

Even the ‘real’ world is scattered with reminders of what used to be. A hotel is frozen in time, the scattered belongings of its guests – suitcases and odd shoes and forgotten toys – sprinkled throughout the ruins. It’s the kind of place that someone coined the word “hubbub” for, a room that’s supposed to ripple with laughter and footsteps and the endless ting of the bell on reception. For you, though, it’s empty. Cold. Dead.