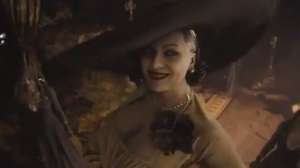 And in those snippets of gameplay we see a mysterious, apparently super tall vampire lady – who has in the last few days become something of an internet sensation.

This smiling lady, who wears a white dress and hat, looks creepy as all hell, and not someone you’d want to spend much time with on a cold, dark night. But the internet… well, the internet is having it’s fun.