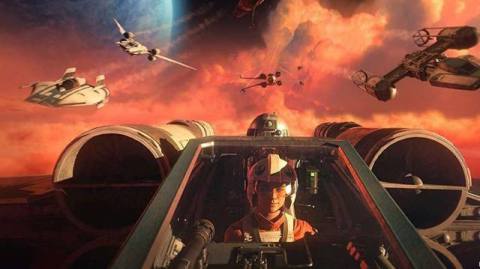 Star Wars and FIFA 21 are getting heavily discounted too.

With supermarkets battling it out for Black Friday Nintendo Switch sales, Tesco appears to have thrown its hat in the ring, with rumours abounding that it will be lowering the price of the Nintendo Switch Neon and Grey models to £229.

It’s a serious discount for a highly-demanded console, though it won’t be around long – from 24th November through Black Friday itself. Not only that, but there’s already discounts on major games like FIFA 21 and Star Wars: Squadrons. The latest instalment of gaming’s biggest football franchise is down to just £30, and the joy of X-Wing dogfighting could be yours for only £20.

We’ve laid out the links for both FIFA 21 and Star Wars Squadrons below, though right now there aren’t any pages for the Switch itself, either because they’ll be added when the deal goes live, or because the deal will be limited to in-store purchases. Either way, we’ll be sure to update this page as we get more information closer to Black Friday itself.

With more and more Black Friday discounts already in play, we’ve got you covered whatever your preferred form of gaming. For just a few examples, check out our page on Asda’s own gaming discounts, or our hub for Black Friday Xbox deals, or head over and look at all the Black Friday PS4 deals we’ve amassed. Or you can always take a peak at Jelly Deals Twitter, where discounts on everything are gathered for you to pick from!