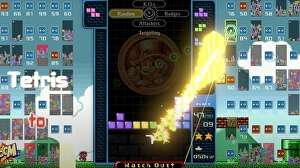 If your battle-royale-infused block-spinning still isn’t Mario enough for your tastes, there’s a chance to unlock a new Super Mario All-Stars theme for Switch’s Tetris 99 this weekend, as part of Nintendo’s latest limited-time Grand Prix event.

Surprisingly, Super Mario All-Stars’ inclusion marks only the second Mario crossover for Tetris 99 – a Super Mario Bros theme can be unlocked with in-game currency – and those wishing to add the new theme to their collection can do so starting from 7am this Friday, 4th December.

The event – part of Nintendo’s ongoing celebrations marking Super Mario Bros’ 35th anniversary – is the 18th Grand Prix to be held in Tetris 99 since its launch back in February last year, and will continue until 6.59pm on Tuesday, 8th December.