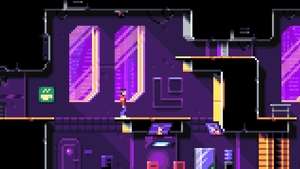 I don’t think Lunark is about time travel, but for me it’s a bit of a time machine. This is one of those 90s adventures where a hero in blue jeans and white sneakers mantles their way through an alien world. It’s Flashback, and it’s a bit of a flashback too. For whatever reason, this shameless piece of nostalgia has really clicked with me. I love it.

Lunark chucks you into a mysterious future where industrialists are doing iffy things and something’s happened to the moon. It’s a 2D affair, and movement initially seems sluggish, a reminder of the days when graceful animation came at a price.

After a quick robot tutorial, though, you’re introduced to the dash button, and you’ll soon be running and jumping and blasting critters all over the place. It’s the same mixture of elegance and awkwardness I remember from games like Flashback and Another World, and the same gleeful, colourful imagination regarding what the future will look like.