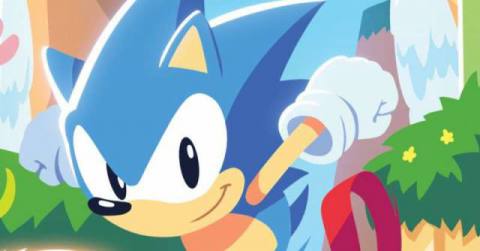 Joining the team that features longtime writer Ian Flynn and artists Mauro Fonseca, Reggie Graham, Aaron Hammerstrom, and Thomas Rothlisberger are multiple New York Times bestsellers. Gale Galligan, best known for her illustration work in The Babysitters Club, and Justin, Travis, and Griffin McElroy, known for My Brother, My Brother, and Me and The Adventure Zone, join the established creative team behind the Sonic the Hedgehog comics.

“Sonic has been central to my creative career for years,” Flynn said in a press release. “I’ve had the pleasure of writing the little blue hedgehog in a variety of media, and he, in turn, has introduced me to an army of artists and editors who have helped me grow as a professional (and made me look good). I’ve had a long run with Sonic, and I hope that continues for years to come!”

The first story is called “Seasons of Chaos” and comes from Flynn, Hammerstrom, and Graham. This story features Sonic heading off on an adventure to retrieve the Chaos Emeralds alongside Tails, Knuckles, Amy, Mighty, and Ray. The second story, penned by Galligan and illustrated by Rothlisberger, centers on Dr. Eggman celebrating his birthday in a “surprisingly poignant” way. The third and final story comes from the McElroy brothers and Fonseca. In it, Sonic finds himself in the humorous situation of learning how to drive a car as the fastest creature in the universe.

This special-edition comic will be available with multiple cover variants, featuring different art from Sonic Team, Christina-Antoinette Neofotistou, Patrick Spaziante, and Tyson Hesse. Also, IDW will release a Deluxe Edition, which features a hardcover and bonus content at a $20 price-point.

Sonic the Hedgehog 30th Anniversary Special is set to launch alongside the franchise’s 30th anniversary this June, while the Deluxe Edition is scheduled for release on October 5. IDW is also launching the first of its hardcover collections of previously released entries in the ongoing series. Sonic the Hedgehog: The IDW Collection, Vol. 1 gathers the first 12 comics in the series and releases on June 22 for $60.

IDW took over from longtime publisher Archie Comics in April 2018. Since then, the series has released nearly 40 issues in the ongoing series. For more on the IDW Sonic comics franchise, check out our interview with Flynn from when the IDW partnership was first announced here.