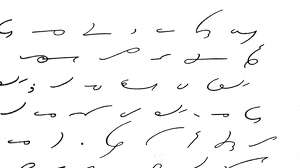 Gloucestershire, England, 1837: renowned English educator Sir Isaac Pitman published what would become the most culturally significant of the seven books he wrote before his death in 1897, Stenographic Sound-Hand. In it, Pitman outlined a series of phonetic abbreviations to better write British-English as economically as is achievable – a style which is simply known as Pitman’s Shorthand.

Around the same time, print journalism began to boom across Europe and North America. Late 18th-century American colonies would be motivated by newsletters to revolt against the British, Chromolithography revolutionised colour printing, and Napoleon’s censorship laws were lifted after his exile in 1815. The art of print news had become a pivotal influencer, and Pitman’s Shorthand would serve as the hilt in which journalism’s steel blade rang its mighty unsheathed roar.

Nowadays most newsrooms prefer to use Teeline Shorthand. Created by James Hill in 1968, Teeline builds upon Pitman’s with a few changes to better suit news reporting. It’s mainly used in Commonwealth countries, with the National Council for the Training of Journalists – an organisation that regulates the education of journalists in the UK – acknowledging its usage.