So you think you like Super Mario Bros. 3, eh? Do you like it for $156,000, because this collector sure does. A super-rare Super Mario Bros. 3 variant copy of the Nintendo game just broke the world record for the most expensive title, selling for just over the aforementioned amount.

The sale by Heritage Auction house marks the second time this year that this world record has been beaten regarding a bidding-style sell. Earlier this year, another copy of the first Super Mario Bros. game auctioned off for $114,000, but the third game’s variant was seen as more valuable by the community.

“We couldn’t be more pleased about breaking the world record for the second time in the same year,” says Valarie McLeckie, Heritage Auctions’ Director of Video Games. “That said, it’s no surprise that another Mario game, which so many of us grew up with, would set the new bar.” 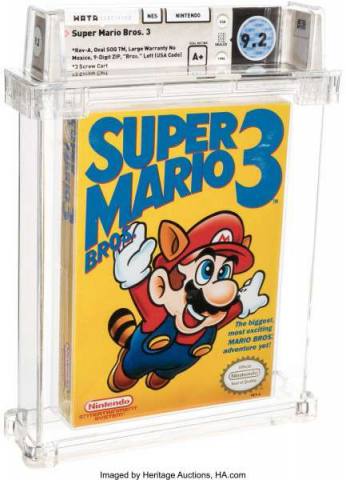 The bid for this rare sealed copy started out at $62,500 and the price quickly skyrocketed from there. It’s not just the sealed condition of this game that made it such a hot item, it’s the fact that it’s a variant that is incredibly rare with the Bros. formatting seen on the left, overlapping Mario’s right hand. According to Heritage, this variant of the Super Mario Bros. 3 art is highly coveted among collectors, which was evident by the bidding nature of the most recent auction. There are apparently only three versions of this particular variant in existence, which only added to that appeal.

As a huge collector myself, it’s always wild to me to see the lengths that this community goes to in order to nab that coveted item. Passion is passion, but phew. I would love to have that much money in my back pocket to spend…

What do you think about the latest record to be broken regarding a video game sale with this Super Mario Bros. variant? Too much or do you regret you couldn’t beat ’em to the punch? Sound off with your thoughts in the comment section below!