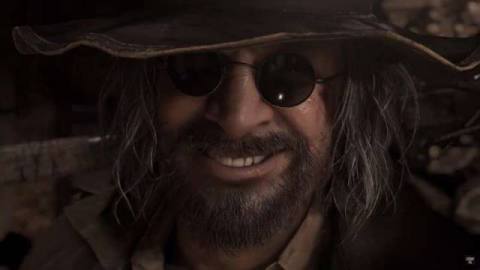 Resident Evil Village looks to chill its player base to the bone with macabre environmental art, blood-curdling combat encounters, and eerie narrative suspense. In the new trailer released today (see above) during the Resident Evil Village Showcase and 25th Anniversary celebration, Biohazard’s Ethan Winters is once again at the mercy of ghouls, monsters, and a vampire lady(?). You can see the trailer above.

During the opening moments of the trailer, a simple phone conversation between the infamous white-gowned woman and the mysterious Sister Miranda give vague hints about Resident Evil Village’s plot. Ethan Winters has escaped the evil clutches of someone named Heisenberg and has infiltrated the castle for some reason. Ethan’s wife, once again, is missing and an important ceremony is about to take place – it’s no surprise that occult practices will play a pivotal role in the story. We also get a brief glimpse of Chris Redfield and a creepy guy donning shades and a trench coat with what appears to be telekinetic powers and a bone-crushing club.

Resident Evil Village launches on May 7 for PlayStation 5, Xbox Series X/S, PlayStation 4, Xbox One, and PC. If you’re as excited about the next chapter in the iconic horror franchise as I am, be sure to play the demo on PS5 and secure your pre-order bonuses today.