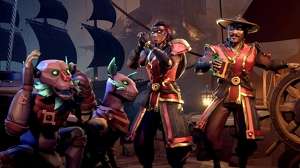 Sea of Thieves is launching its new seasonal content schedule and battle-pass-style progression system this Thursday, 28th January, and, in preparation, Rare has served up a handily informative breakdown of everything in store, hopefully answering any lingering questions pirates may have before raising anchor and setting sail later this week.

Each season will last approximately three months, and each will begin by introducing a fresh dollop of content (in Thursday’s case, a new voyage-type for the much-maligned Merchant Alliance), ongoing live events, and most notably, a new 100-level progression system.

Rare says Sea of Thieves’ new three-month content release schedule will allow it to “craft more meaningful experiences…and return to a more predictable rhythm of release.” However, it also notes the game will continue to receive smaller monthly updates, delivering bug fixes, quality of life improvements, and new stock for the Pirate Emporium.