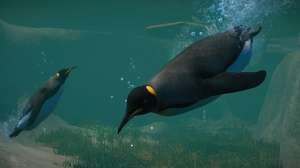 Planet Zoo is set to get a little bit splashier next Tuesday, 8th December, courtesy of its new Aquatic DLC, which adds, among other things, penguins and otters.

The Aquatic DLC is Planet Zoo’s fourth paid expansion – following on from its Australia, Arctic, and South America Packs – and is, unsurprisingly, all about water-dwelling creatures. In total, it adds five new animals – the King Penguin, Giant Otter, Diamondback Terrapin, Cuvier’s Dwarf Caiman, and Grey Seal – and at least some of these make an appearance in the trailer below.

Additionally, Planet Zoo’s Aquatic DLC introduces 170 new water-themed foliage, scenery and zoo construction pieces – including animal sculptures and cascading waterfalls – and there’s a new timed scenario set in Oregon too. This one challenges players to flex their management muscles and make the most of a space-limited zoo built on a drained riverbed.