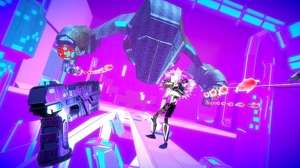 2089, which made its debut on PC at the tail-end of last year, transplants Pistol Whip’s mesmerising, music-driven first-person shooter action – an intense, balletic mix of dodging, ducking, blasting, and high-score chasing – to the far-flung, neon-smeared future.

What follows is an five-scene, 30-minute-long story campaign – complete with animated cutscenes, voice work, and a synthwave soundtrack – in which protagonist John Asminov confronts an army of killer machines after tracking a distress signal to an off-world colony.