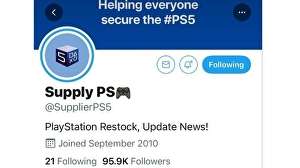 An NHS executive’s Twitter accounts were hacked to promote a PlayStation 5 sales scam.

Helen Bevan, who is chief transformation officer of NHS Horizons, saw her two Twitter accounts with a combined 133,000 followers hacked and then used to flog fake PS5s, the BBC reports.

According to the BBC, Bevan paid £110 to someone who said they could restore the accounts within 25 minutes, but they turned out to be a scammer as well.