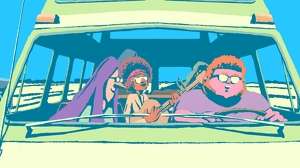 Look at that font. 70s poster font. Gig font. A font with flares. Lurid and a bit goofy, it tells you so much about the game. More, even, than the title: A Musical Story.

No, that’s probably not fair. A Musical Story is a musical story. A musician lies in a hospital bed with no memories. So you use music to recreate them. It’s a narrative rhythm action game and it’s already pretty special.

The heart-rate monitor is the ultimate baseline. When it appears on screen at first, I find myself pushing buttons in time to it before I’ve even been told to, before there are prompts. From there, a game builds: a piece of music plays and you match the button presses that appear on screen, using just the right and left bumpers. Right, left, both, sustain. It’s simple but you get a lot out of it.