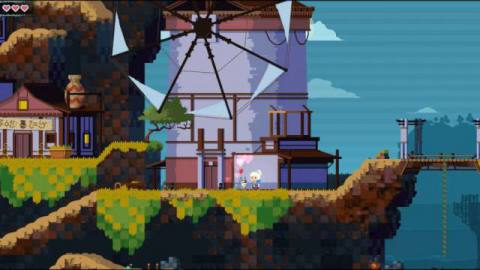 On paper, YesterMorrow is a really neat concept for a game. A side-scrolling adventure, its main twist is the ability to jump between two separate timelines, spaced several years apart. You play as Yui, a young girl whose life is thrown into disrepair after her home is destroyed and her family kidnapped by ‘Shadows’ during the Festival of Light. Wracked with guilt for failing to act quick enough, she sets off on an adventure to reverse her misfortunes, save her family, and fix her past.

What’s immediately striking with YesterMorrow is its visuals; the game looks really slick right from the start. It’s not pixelated, but the art style utilised certainly gives off a pixelated effect. The characters are ‘chunky’ in an endearing, adorable way, and the environments are bursting with colour and personality. There are lots of little details, from the way water ripples when you walk through it, to how Yui’s hair swishes about as you jump across platforms. Oh, and you can pet lots of animals.

The gameplay is – surprisingly – largely devoid of any combat. It focuses more on the platforming and puzzle aspects, utilising the time travel mechanic to alter your immediate surroundings; so for example, boulders might be blocking a passageway in the future timeline, but hopping into the past will remove this pesky obstacle. It works both ways, too: you can flip a switch in the past, go back to the future (come on, we had to get that in there) and whatever the switch activates in the past will, somehow, still be ticking along in the future.

Unfortunately, the novelty of time travel wears thin pretty quickly. It’s really the only unique aspect to YesterMorrow, and the game’s heavy reliance on the mechanic means that you’re going to be constantly backtracking trodden ground, switching between timelines at such frequency, it soon becomes quite repetitive. In addition, the rest of the game’s mechanics – from the platforming to puzzle-solving – are very much a case of ‘been there, done that’. We’ve seen it all before, and YesterMorrow ultimately fails to inject enough originality to hold our attention.

To make matters worse, YesterMorrow on the Switch is a bit of a disaster from a technical standpoint. It strives to hit 30fps most of the time, but there are far too many occasions where it plummets to a snail’s pace; so much so that it even causes input lag when you’re jumping about and avoiding enemies. We also came across a frankly bizarre technical hiccup in which flashes of light would come across the screen, flickering with such intensity that it would give Pokémon’s infamous ‘Dennō Senshi Porygon’ TV episode a run for its money. Check out the screenshots above, and you’ll see what this issue looks like in a static image; it’s much worse in motion, mind.

It’s a real shame that YesterMorrow performs so poorly, because visually it’s a real treat, and it’s backed up by a pretty great soundtrack. More importantly though, its gameplay – while functional – can’t hold a candle to a game like Celeste, and we feel it really should have nailed this aspect if it’s to be successful. YesterMorrow may be worth a go if the severe technical issues get ironed out, but it’s by no means a must-buy.