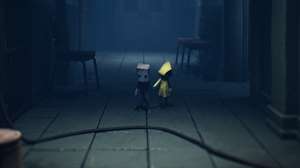 It’s hard to scare someone twice, especially if you’ve used similar scares before. In the case of Little Nightmares, that’s a cellar-dark world of fleshy adult grotesqueries, who shamble around and hunt a tiny child. It’s bizarre, it’s unsettling, it is unforgettable. But can a sequel pull the same trick again?

I’ve played it for a couple of hours and I was worried to begin with. The Hunter I saw in the first chapter didn’t do much for me. He chased me with a shotgun through his trapped grounds, shooting at me, while I hid behind cover and in the long, dark grass. And it wasn’t pleasant, it was tense, but it didn’t surprise me. Didn’t scare me.

Then, though, in the second chapter, we went to school. And this did scare me. Think of it as an olden days school, an austere place of wood and rules, and physical punishment. A place of terrified, and terrifying, children. And Her.