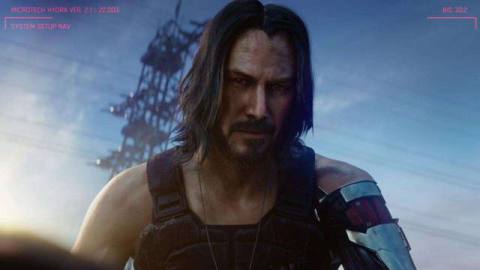 As well as his in-game character Johnny Silverhand, Keanu Reeves the actor is also canon in the Cyberpunk 2077 universe.CD Projekt Red Senior Quest Designer Patrick Mills revealed the “lore-friendly” news on Twitter. Mills is referring to a lyric in the new Run the Jewels song ‘No Save Point’ created specifically for Cyberpunk 2077.

In it, Killer Mike raps “That’s righteous, huh? Slapping palm, holding a pump – Keanu Reeves, cyber arm under my sleeve.” Given that Run the Jewels are appearing as in-universe group Yankee and the Brave, the reference has to be in tune with the game’s lore. So how can Keanu Reeves exist in the same timeline as Johnny Silverhand?

The KR lyric is lore friendly. It’s an in universe cultural reference to KR, a little known Collapse-era actor who bore and uncanny resemblance to Johnny Silverhand, and in the years following Johnny’s disappearance, was frequently mistaken for JS. https://t.co/AxpPvlww97

What this means is that Johnny Silverhand and Keanu Reeves both exist in the Cyberpunk universe. It’s all a bit confusing, but it’s a neat nod and a good workaround for the potentially troublesome lyric.

Speaking of Keanu, we’re due to learn more about Johnny Silverhand in this week’s Night City Wire episode. In other Cyberpunk 2077 news, CD Projekt Red recently reconfirmed the game’s new December 10 release date after rumours of another delay began to swirl.