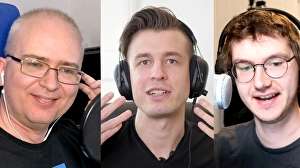 We’ve been looking to expand Digital Foundry in new directions recently and one of the most fun things we’re doing is a weekly show discussing news, shorter stories where we don’t have the time or manpower to deliver full-on analysis, plus quick looks at nice hardware that’s caught our collective gaze. DF Direct Weekly is also a great opportunity for our Patreon supporters to get more closely involved with the team, while we’re starting to open up more about current projects in production and to discuss some of the feedback we’ve received. It’s more laid back and casual than our usual output and for us, it’s a fun way to end what is usually a hectic week!

We’ve been working on refining the show since we debuted a couple of weeks ago, and you can catch the first two episodes here and here. The ‘cast’ of DF team members involved in the show rotates on a week by week basis, and I’m joined this week by Crysis connoisseur and PC specialist Alex Battaglia along with hardware man and @DealsFoundry mastermind, Will Judd.

Topics on the slate include the latest batch of FPS Boost titles, thoughts on Sony’s direction with PSVR2, the mixed reaction to the Radeon RX 6700 XT, plus the challenge facing Intel with its upcoming Rocket Lake CPU launch. Alex tells us about his discussions with the developers of Marvel’s Avengers for PlayStation 5, while the team discuss AMD’s recent comments on its FidelityFX Super Resolution FSR technology – is it actually an alternative to Nvidia DLSS or is it something quite different? Meanwhile, Will fills us in on the excellent new Xbox Wireless Headset.