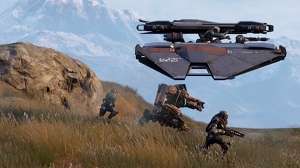 I have a theory, sweetly unburdened by any kind of evidence, that argues that developers sometimes try to recreate the power and pleasures of using actual game-creation tools for their players, but without the attendant need to understand maths or architecture or much in the way of technology. To put it another way, I suspect they take what they love about a tool or a bit of software, and they transform it into something the player can love too.

I feel that very strongly while moving about on Disintegration’s Gravcycle, a beautiful machine, all but invisible to the first-person player during main missions, but constantly present in the way it ghosts over the rock and dirt and concrete of the game’s levels, directed, it seems, more by impulse and desire than the things I’m doing with the sticks and triggers of the pad. It seems to know where I want to go. Physically, the Gravcycle borrows its iconography from motorbikes – all those beautiful pipes and vents and exhausts. But what it really feels like is the “freecam” movement you get from the debug viewers in a game engine. It feels like a dream.

Disintegration is one of those games that always makes me think of the way games are made, and that’s not just because of the debug Gravcycle, or even now, the sad news this week that V1 is closing down. It’s partly to do with the developer’s lineage with the Halo series, I suspect, but not entirely. It’s also because of the skill and pleasure that I tell myself I can see in the way it’s all been put together. Disintegration’s is a sparse kind of design, which might have something to do with budget, certainly, but which feels like it has more to do with experience. Take the Gravcycle again – give players a machine like that, with so much care in the handling, and people are going to have fun. Disintegration’s makers seem to understand what you need as a player and what you don’t need. No wonder I returned to Disintegration this past week, and fell in love all over again.