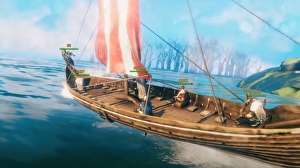 A couple of weeks ago, I wrote an article about Valheim’s Body Recovery Squad – a group of players who risk virtual life and limb to help players get their items back, no matter the difficulty, and do it all for free. It’s a wonderful community effort, but something you might not expect is that the BRS is also a well-oiled machine, with lots of work going on in the background to keep the wheels turning. Members file paperwork, take part in training exercises, and even carry out industrial-scale farming to keep operators stocked and fed.

I discovered all this for myself when invited on a “ride-along” with BRS founding members Lucas (RimJaynor), Brendan (Spanky), Jonny (Small_T2) and Gareth (Rolivend), who took me on several missions and even gave me a tour of their warehouse. In total we went on four recoveries – some tougher than others – and on at least two occasions the team also had to recover me, too. I guess I could have done with a spear-proof vest. So here’s an overview of what happened that evening, complete with footage from our dramatic first and fourth missions, and an MTV Cribs-style tour of the BRS warehouse.

To kick things off, you can find the video of our first mission below – featuring a very a rough landing in the swamps. Discord and Steam overlays have been edited out to protect player information, so stick around a few minutes before we dive into gameplay: