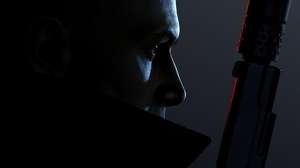 Hitman 3 is the final act in Agent 47’s struggle against his nemeses at Providence, the illuminati-style collective of crooked politicians, crimelords and corpos introduced at the start of the World of Assassination trilogy back in 2016. I don’t care much about that story, with its paint-by-numbers betrayals and toneless briefing sequences: its only virtue is to keep you moving around the globe, from one extravagant playground to another. But much to my surprise, I do care rather a lot about Agent 47, about the strange figure he cuts against the contents of his own world and the wider landscape of videogames.

The big joke of 47, of course, is that you can’t miss him. He stands out like, well, a menacing, chalk-white man with a barcode on his head. In the reboot trilogy, you can mingle with NPCs to throw off suspicious guards, and the impression is always of a fridge trying to blend into a flock of sheep – even the Terminator looks more natural in a crowd. And yet somehow, 47 is the ultimate shape-shifter, able to disguise himself as anyone from a noodle chef to a celebrity DJ. IO has wisely refrained from making this ability to fit in more plausible, even as it has pumped up the splendour of Hitman’s locations, and the result is an assassination game that is secretly a comedy long before you start dressing up as a butler and whacking people with fish.

The joke extends to the fact that Agent 47 is somewhat unconvincing as an avatar, or at least, an avatar in a game that occupies the same commercial plateau as Assassin’s Creed. He’s an old school anomaly carried forward from an era when ledge-mantling was an exotic practice. When he puts on a disguise, the clothes simply teleport from the victim’s body to his own. When he stows a corpse, there’s a slightly awkward little cutscene. I’m not convinced 47 even obeys the same laws of physics as anybody else in the game. When he’s shot, it makes no impression beyond a bit of controller rumble.