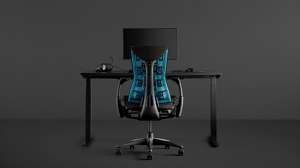 Herman Miller is a legendary name in office chairs, a Silicon Valley staple often brought up as an alternative to any new gaming chair. Last year though, Herman Miller announced it would be making a gaming chair of its own in cooperation with PC peripherals giant Logitech – the Herman Miller x Logitech G Embody Gaming Chair. As you might expect from the brands involved, this is a super-premium option with an eye-watering sticker price of £1195 – and it’s just one part of a three-piece set that also includes the £175 Ollin monitor arm and the £995 Nevin Gaming Desk. Is any gaming furniture worth that kind of money? I’ve been testing out all three elements to find out – and after five months, I’m prepared to deliver a verdict.

Let’s just say it up front. The Embody Gaming Chair is by far the most comfortable chair I’ve ever used, particularly for long working or gaming sessions when you’re sat down for extended periods. My back feels better supported, my legs don’t ache and in general I look a lot more like that perfect posture guy you see in ergonomics infographics. This is largely down to its unique adjustability options, like a pair of handles that let you pull out more material to make the chair deeper, individual controls for adjusting the upper and lower back support and arm rests that can be splayed out or brought close to the body in addition to being pulled up or down.