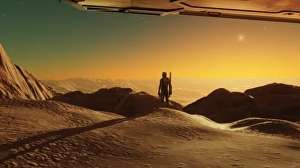 While console players will now be waiting a little longer than expected for the arrival of Elite Dangerous’ Odyssey expansion, its foot-based first-person antics aren’t too far off for those on PC – and ahead of its “late spring” launch on the platform, developer Frontier has honed in on one of its new features, Settlements, and shared more details.

Odyssey’s settlements, you might recall, are dustbowl-like havens for NPCs belonging to that system’s dominant faction and are found on the surface of certain planets and moons. Players can explore settlements at any time in order to engage with (or even attack) their inhabitants, and may also be required to infiltrate them to complete certain on-foot missions objectives.

In a new post on the Elite Dangerous forums, Frontier has now shed a little more light on settlements, responding to questions posed by the community. There’s a bloodthirsty streak running through the majority of queries, with most players apparently curious to know what will happens should they attempt to completely wipe settlements off the map.