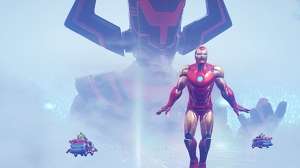 There’s been criticism this Fortnite season has been too much of a Marvel advertisement, that the game’s first crossover battle pass was too much crossover with too little Fortnite underneath. But after the fireworks of tonight’s season finale, and with all the game’s Marvel influences seemingly warped out of the way, Epic has left its game on an enormous cliffhanger, and definitively moved on Fortnite’s own internal narrative.

Let’s recap. Throughout the season, Marvel planet gobbler Galactus has been looming ever closer, drawn in by the temptation of a tasty snack on Fortnite’s all-powerful Zero Point. (That’s the shiny orb thing which used to live under the old map’s Loot Lake, and which seemingly hides beneath this new map, too.)

Tonight’s live event, which seems to have gone technically smoothly, brought Galactus bearing down on Fortnite’s world in a scripted sequence featuring voiced cameos from Iron Man, Thor and Wolverine. You were the star of the show, gifted a jetpack by Tony Stark then warped inside of a battle bus rigged with explosives. The plan? Drive at Galactus. Don’t miss.