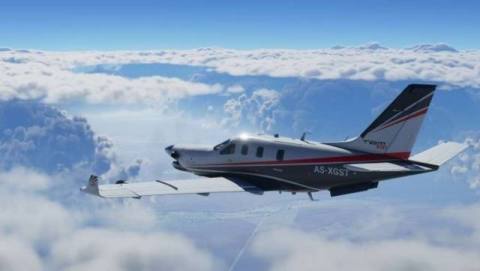 And VR support for all devices due in December.

Flight Simulator has only just released its latest World Update, this one giving the USA’s most iconic landscapes some much-needed attention, but already developer Asobo is talking about its next round of planetary enhancements, confirming it’ll be upgrading the UK in January.

In a similar fashion to earlier geographical spruce-ups for the USA and Japan, Asobo’s third World Update will aim to create a more accurate rendition of the UK using “awesome” new data and aerial images for England, Scotland and Wales, and with a host of new landmarks.

In total, as revealed in Asobo’s latest livestream, the studio is aiming to introduce 50-60 new points of interest, new procedural buildings (including churches), and improvements for a range of existing airports, such as Land’s End, Liverpool EGGP, and Manchester Barton. Additionally, players can expect to see new landing challenges and a new Bush Flight.

And in case you’re wondering about Northern Ireland, Asobo says it’s currently trying hard to assemble everything needed to improve its digital recreation – and indeed that of Ireland as a whole – although it’s not clear if that will be ready for World Update 3.

Elsewhere, the developer once again confirmed its commitment to releasing new content updates every month or so; these will alternate between Sim Updates and World Updates, and be interspersed with other, bigger, less frequent content additions further down the line – although it says it isn’t yet ready to talk about those “because honestly they take time”.

Asobo did reveal, however, that this week’s World Update won’t be the last time the team rolls up its sleeves and digs into the US. Players can expect a US Update 2, and even a US Update 3, some time in the future – which will include improvements to Hawaii and Alaska – “because it’s going to take that long to get the whole massive, massive country really processed”.

Before all that though, Asobo will be introducing VR support for all devices in its 22nd December update, and then it’s the UK’s turn for a makeover, currently pencilled in for a 26th January arrival next year. And if you’d like to know what else is planned for Flight Simulator, you’ll find more information – including word of an imminent water mask update to add more of those gorgeous translucent coastlines seen in trailers – in Asobo’s livestream.