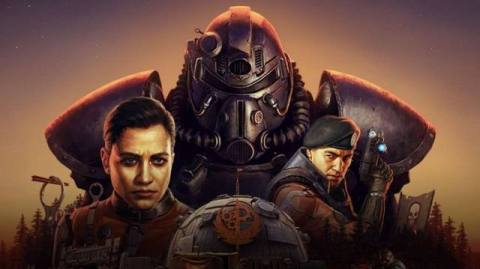 Fallout 76’s much-anticipated Steel Dawn update, which introduces the Brotherhood of Steel faction to Appalachia, was originally scheduled to launch on 1st December – but those who logged in yesterday may have found themselves checking the date. That’s because the whole update has now been released early, and it’s all due to an error which caused Xbox players to download the update a week ahead of schedule.

As explained in a blog post, not only did the error cause Fallout 76 players on Xbox to download the update early, it also prevented them from actually playing the game, making the situation a little more urgent. It seems Bethesda considered simply reverting the update and making everyone wait another week, but settled on bringing the launch forward instead. “We immediately investigated ways to get our Xbox players back in-game as soon as possible, but, through our discussions, the entire BGS team felt confident that Steel Dawn is ready to go,” Bethesda said yesterday. “As a result, instead of rolling back the update and making everyone wait another week, we’ve decided to release the Steel Dawn Update on all platforms.”

Along with the introduction of Brotherhood of Steel content, the update brings a welcome change to how hunger and thirst works: negative effects from these conditions have been removed, while being well-fed or hydrated will now give you a bigger buff, meaning these mechanics will be a little less punishing. A couple of the changes listed in the patch notes, such as dynamic bundles (which means bundle prices will be reduced for players who already own some of the items they contain) will not go live until the intended release date of 1st December. You can find the in-depth patch notes over here.

Bethesda didn’t explain exactly how the update rolled out early on Xbox, but according to players it seems to be running smoothly despite its early launch. In fact, some seem quite pleased with the sudden change in release date. “Don’t care who screwed up or why, thanks for deciding to release the update,” said Reddit user Sangelve. “I’m on vacation/holiday all this week.” All’s well that ends well, I suppose.

If you’re looking for fresh Brotherhood of Steel content in your single-player Fallout games, I recently spoke to the creators of Fallout 4 lore mod Fallout: Brotherhood, which explores the origins of the faction and features voice acting from Mark Meer, who’s known for playing Mass Effect’s male Commander Shepard.