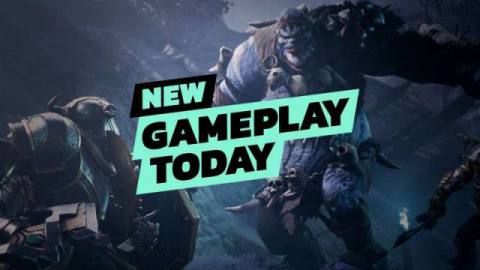 Let me take you back, back to a simpler time where video game events were held in person, and you could walk down the block and not worry about breathing in someone’s disease. During The Game Awards 2019, Geoff Keighley took the stage with Jeff Hattem, founder of Tuque Games, to unveil Dungeons and Dragons: Dark Alliance with a bonkers trailer featuring heavy metal, a head-turning camera angle, and a whole lot of goblin killing. Seriously, what is going on in this?

Flash forward to today and Tuque Games is finally giving us a look at what players can expect from the gameplay of Dark Alliance. You won’t be slaying frost giants, white dragons, and other mythical creatures on your own, though. Dark Alliance is a co-op game that has players choose between four distinct heroes that fans of the series may be familiar with. The action RPG also features all the looting and hack and slash action one could hope for, all set on the backdrop of the seminal tabletop series.

And who better to talk about Dungeons and Dragons than our king of the tabletop, Matt Miller? Join Matt and me as he takes us through his hands-on time with Dark Alliance. Not only do we chat about how the game feels to play, but we also discuss how Tuque Games is smartly implementing lore and history that D&D fans will appreciate.

Fans of the tabletop series don’t have too much longer to wait, as Dungeons and Dragons: Dark Alliance drops June 22 on PlayStation 5, Xbox Series X/S, PlayStation 4, Xbox One, and PC!

Do you not only like video games but tabletop RPGs as well? Be sure to check out Matt Miller’s most recent Top of the Table column, where our game expert discusses five fantasy RPGs that he thinks you’ll like if you enjoy the classic adventures of Dungeons and Dragons.