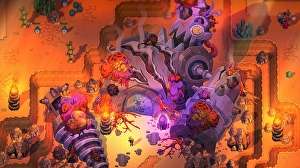 There’s a kind of innocence to some humour, an innocence it needs in order to work. You realise this when you think about Guacamelee, Drinkbox’s breakout PS Vita hit – a game with these strange things called “memes” in it, a game named with a pun. I feel like we probably wouldn’t enjoy a game with memes in it in 2021 – they’re familiar now and sort of oddly important, and so you lose the innocence. But Drinkbox has kept the innocence elsewhere with Nobody Saves the World. It’s another silly, but also seemingly very good, game that’s built on humour first and clever evolution of genre just behind it, and another game named with a pun.

You play as someone called Nobody in Nobody Saves the World, which drops the wrestling metroidvania costume of Guacamelee (barring a few familiarly chicken-sized tunnels) for the fantastical cloak of a dungeon-crawling action RPG. It’s not the genre I expected, after battering my way through Guacamelee, but it’s a result of the studio wanting to keep “engaged and creative,” as lead designer Ian Campbell put it, and the result is a game that feels the same: energetic and zippy and full of snap.

There are small twists on the genre. The first is that Nobody Saves the World is built around switching “forms” on the fly. Nobody is a blank and comically useless canvas of a character who nabs a special wand, the waving of which allows you to transform into one of what Campbell says is 17 or 18 forms available for the moment (“we’re trying to do more but that’s what we have right now”), each a little ridiculous and purposefully “non-standard”. I took on my first dungeon as a rat, for instance, with some poison-y, gnawing attacks, and then unlocked a fairly run-of-the-mill ranger, followed by an odd, much less run-of-the-mill magician that summons rabbit familiars and jabs people with a fan of cards. There’s a horse, and so on (I am not selling this as laugh-out-loud, I’m aware! But sometimes humour is simply levity, and Drinkbox has a magically light touch).