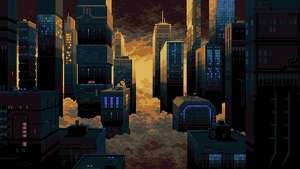 There are touches, like those lovely clouds, that elevate Disjunction from being just another top-down, pixel-art stealth game with cyberpunky vibes, to something a little more. It’s the first effort from Ape Tribe Games, a tiny studio of three brothers based in New York, and it’s really quite good. You play as three characters, rotating between them as the action progresses and your stories intertwine, delving into futuristic underworlds and all the usual webs of lies.

It’s familiar stuff, but it works well enough. There’s a criminal mystery for you washed-up P.I.s, ex-cons and hackers to get tangled up in, some gangs, some corrupt politicians, some mega-sized military corporations with double-barrel names and a spot of future-tech thrown in with it all. Exposition is a little lore-dumpy – as in, lots of long paragraphs and proper nouns – but Disjunction’s unusual kind of intentional slowness can make that pensive, text-heavy sort of thing work.