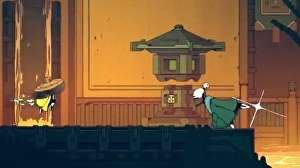 Devotion developer Red Candle Games has teased its next title – and it doesn’t look anything like its previous games.

In a tweet, the Taiwanese developer released a short clip of what looks like a 2D action game. It’s a work in progress, of course.

Red Candle is best known for the superb horror game Devotion, which recently returned to sale digitally two years after it was delisted on Steam.