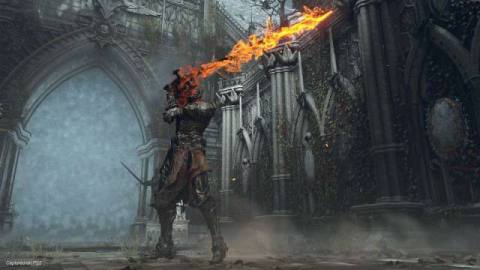 Bluepoint’s PlayStation 5 exclusive Demon’s Souls remake is available now, if you’re lucky enough to have your hands on one of the next-gen consoles. If you haven’t already, definitely go check out our review of the title right here. If you’re looking for a taste of what’s in store, look no further than a new launch trailer that showcases some of the signature moments, milestones, and bosses that players may remember. Be warned, all the cool stuff in this trailer absolutely counts as spoilers if you haven’t been through the Demon’s Souls journey before and want to experience things truly blind. Still here? Let’s break it down!

First, we are treated to a sprawling look at the Nexus. As your hub in Demon’s Souls, you’ll spend time here between exploring deadly and dangerous worlds. It’s your home and sanctuary, and you will interact with several important NPCs during your time here. Do be careful not to attack them by accident. Except for the Maiden in Black, who you can level up your abilities with after completing the first stage of the game — you can kill her as much as you like and she’ll respawn.

Next, we see a dragon flying over a bridge. This is an extremely common theme across the Souls games, as is what those dragons do on bridges — breathing fire on them, killing everyone on it. You can sometimes use this to your favor by letting the dragons to the work for you by baking enemies to a crisp, as you’ll still get the souls from their deaths. You won’t even have to get your hands dirty!

Then, a quick glimpse at Latria. Latria’s prison, spires, and desolate interiors make for a sprawling crawl, and it is one of the best recreated areas in this game in my opinion. Despite the maddening search to find keys, open doors, and dodge Mind Flayer paralysis bolts, there’s some really interesting stuff here for those studying the Souls series. The Fool’s Idol is a boss archetype that’s still used in modern Souls games, echoing in Dark Souls 3 with the Crystal Sage.

A few quick cuts get us to one of the coolest opening moments in the Shrine of Storms (And oh wow does it get way cooler later on!) when an errant lightning bolt crashes into a tree. An imposing glance from the Tower Knight is followed by the new Fat Official design, which has been a hotly debated topic in the Souls community. For the record, I don’t care for the new design over the old either, but it’s one detail in a game with thousands upon thousands of elements. This is followed by a glimpse of the Fool’s Idol from Latria. Wow, they really crammed a lot in here!

Things start going fast now. Necromancers and skeletons from the Shrine of Storms (Love that place, can’t say it enough!) followed by the Penetrator. It never really crossed my mind how our very vicious friend clearly became Dark Souls 2’s Pursuer until I revisited him a few days ago. Penetrator can be tough, but there’s a quest that can give you a potent ally for the fight if you want to go hunt it down!

Next, Old Monk. Probably one of the coolest fights in Demon’s Souls, because depending on the situation, you will be tasked with battling another player for this boss encounter. He’s still awesome. Next, the Storm King. Absolutely love the size and scale of this thing in the remake, and the backdrop is more beautiful and realized than ever. Old Hero follows. Remember, he can tear you to shreds, but his sight isn’t so great. Use that to your advantage! Finally, well, I won’t say what’s happening there because that’s really spoilery.

Check it out below!