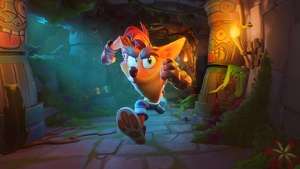 Crash Bandicoot 4: It’s About Time, the latest entry in Activision’s long-running platform series, will be making its way to PC on 26th March.

As the ‘4’ in the title indicates, It’s About Time is a direct continuation of 1998’s Crash Bandicoot 3: Warped – a game that got a gorgeous remake as one third of 2017’s Crash Bandicoot N. Sane Trilogy – and very much takes inspiration from the early series’ brand of platform action.

There are wrinkles to the formula, of course, including masks that slow time, flip gravity, and phase objects in and out of existence, as well as various new modes and playable characters – each with their own unique abilities and stages – but it should all be immediately familiar to Crash fans. It’s About Time even leans into the early games’ brutal difficulty – although a choice between Modern and Retro modes help ease the sometimes immense challenge.