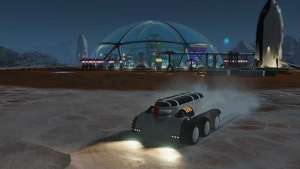 Surviving Mars – which challenges players to rejuvenate the wastes of the red planet, eventually transforming the world into a thriving colony of shimmering domes – initially launched in 2018, and received its last major expansion, Green Planet, the following year.

All’s been quiet since then, but development has now resumed under the watchful eye of Abstraction, which is taking over from Surviving Mars’ original creator Haemimont Games.