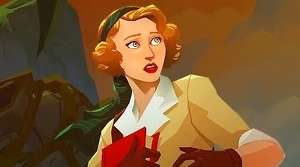 Call of the Sea was one of my favourite games of 2020. Even when I think about it now, I feel warmer. Partly that’s to do with the literal warmth of the tropical island setting, but I think more of it is to do with the gentle nature of the game. It’s a game without combat, a game about puzzles. A game with an eerie mystery pulling you farther in. It’s an adventure played at walking speed, both metaphorically and literally. And I relish that. I relish an adventure I can sink into like a comfy armchair each evening, one that doesn’t rough me up and shake me around before I sleep. I wish more games were like it.

And the more I read about Call of the Sea, the more remarkable it seems. It is the debut game by a Spanish studio called Out of the Blue Games (appropriately), and it was made in only a year-and-a-half. For a game to be built so assuredly in such a short space of time, by a new studio, is very impressive. Intrigued, I tracked down studio co-founder and Call of the Sea game director, Tatiana Delgado, for a chat.

Hello! How are you? How are things over in Madrid?