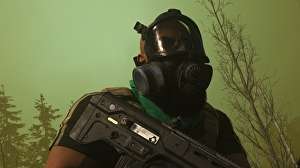 Final circles in battle royales can be daunting for the best of us, but for some players it seems to be something they want to avoid entirely. Warzone’s infinite stim glitch has returned, and players are once again using it to win games by hiding out in the gas. Not so great for those who want to end a game with an actual shoot-out.

The glitch, which first appeared back in October last year, allows players to use infinite tactical items, thus making it possible to spam healing stims and hide away from other players until the game is over. It’s also possible to use the glitch to spam stun grenades, which seems just a little overpowered. Numerous videos have popped up on social media showing players using the exploit over the last few days, including one in which a hacker and a stim glitcher go toe-to-toe. Who will win? Only one way to find out…

Yet some players have managed to get their own back on the stim glitchers: one doing so by truck, and another group hunting a stim exploiter down across the map to clutch a victory. It’s all extremely satisfying to watch.