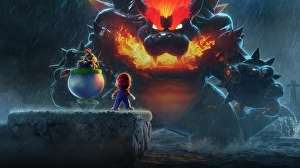 Sunshine looms large over Bowser’s Fury, the expansion that’s being bundled into next month’s re-release of Super Mario 3D World. It’s there from the second you boot it up – which you can do at any point, as this is a standalone experience – though I can’t go into specifics just yet. Rather, I can give you a small taste of this most curious of offshoots.

It could be described as something of an off-cut, as Bowser’s Fury is built from repurposed assets from Super Mario 3D World – the eight way movement has been opened out a bit here but it’s still paired with a sprint button and the same lack of triple jump, as well as the same suite of excellent power-ups including the Cat Suit which once again takes top-billing – but Mario’s often been not so much about the building blocks but what Nintendo’s designers do with them, and that’s certainly the case here.

As opposed to the focussed levels of 3D World, which offered up all sorts of chaotic four-player action, here there’s a shift to the more open style of play favoured by Odyssey, 64 and – of course – Super Mario Sunshine. There’s that same sense of off-beat experimentation in Bowser’s Fury here, and a lot of that same vibe with its islands lapped by gorgeous blue waters as well as so many of the same beats.