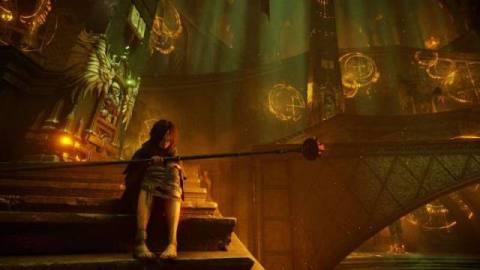 Bluepoint Games has done it again. This team has once more delivered a beautiful recreation of a fan favorite, this time with Demon’s Souls for PS5. Shortly after launch, players of the brutally unforgiving adventure noticed that a new door can be seen in-game, a door missing from the original. No one has been able to open it, inspiring numerous theories about what this door could lead to and what it means for possible future updates.

While there have been some outlandish theories thus far, Bluepoint Games is taking it all in stride. In a show of cheeky good faith, the team took to Twitter to share an image of the door with a holiday card-esque greeting: “Wish you were here!” The team also tagged some of the biggest content creators behind the conspiracy theories.

The door in question can be found in the game’s 1-3 region, but as mentioned — it can’t be opened. The biggest theory regarding what this inclusion could mean is that it is a possible indicator of future DLC, a door meant to be opened at a later date. Another popular take is that the door could be opened following an undiscovered ritual, or even something with a New Game+ update.

Some original game loyalists are hoping that the design for the vanilla fluted armor set can be found, a set that was redesigned during the development of the Demon’s Souls remake.

A new zone, DLC, rituals, vanilla throwbacks; the sky is the limit regarding what this mysterious door could mean. At least the devs are having fun about it, after all…they know the truth.

“Demon’s Souls is the predecessor to a slew of FromSoftware titles, and players can see tons of inspirations for environments and encounters that would reappear later in the Dark Souls series,” reads an excerpt from our own Dan Tack’s full review of Demon’s Souls for PS5. “Having not played the original in ages, this remake was like walking through a fascinating interactive museum in some respects, witnessing the precursors to Blighttown, the Pursuer, and many other series staples. If you’ve already played Demon’s Souls to death, the new Fractured Mode lets you add a little variety to your runs by altering the maps a bit to hopefully throw off your muscle memory and footing.

“For newcomers, Demon’s Souls will be the first exploration into the duality of despair and triumph, and hopefully go on to become a starting point for new Souls fans. For veterans, it’s a homage to an experiment that kicked off a fantastic genre. Either way, it’s wonderful that the nascent ethers from the original classic have coalesced and given us this delightful treat.”

Interested in finding the door yourself for a photo op in response to Bluepoint? You can, because Demon’s Souls is now available exclusively on PlayStation 5.