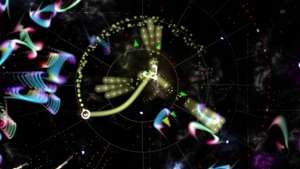 In a certain kind of game I am always called AAA. Not because I am good, or because I am screaming – often I am screaming – but because defeat rockets me out of the game, through the leaderboard name input and back into another round before I can stop stabbing the GO button, whatever button that may be. Bezier: Second Edition has just launched on Switch. It’s a reworked take on the brilliant PC game from – jeepers, 2016! This is that dense, personal kind of game so filled with treats I don’t want to spoil much, but I can at least tell you this: chances are good that in this game your name will be AAA too.

Bezier’s superficially described as an unusual take on Geometry Wars or Robotron. It’s a twin-stick shooter with a luminous aesthetic, an arcade treat in which you are a point of light pursued by other points of light. But Bezier is far weirder. It has bosses and lore and odd terminology. It has enemies who put me in mind of deep-space objects one second and those strange little fish who will follow your finger across the glass of a tank in another. It’s Robotron in love with Terrance Dicks and Nicholas Fisk rather than John Carpenter and Paul Verhoeven. The booming voices! The sense that things are a joke and also not a joke. The ingenious, retro-tinged way you choose which level to go to next. Throw in a bit of Berzerk too.

I have made it sounds like a bunch of influences, but that’s only because I’m a terrible writer and because Bezier is one of those games that sends you into a kind of ruminatory daze when you play. It makes you free-associate to a certain degree, so what I see as its influences are probably my influences. I think a lot of people will think of the great works of Jarvis and Minter when they play, though – and now they can think of all that while they play on Switch, which sounds like very good news to me.