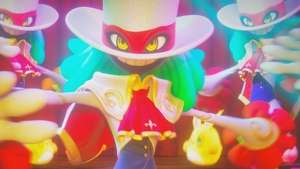 Sonic the Hedgehog creator Yuji Naka is back! Not that he’s ever really been away, of course – after leaving Sega back in 2006, he founded Prope and produced entertaining curios such as Let’s Tap while also contributing to the always fascinating Street Plaza games – but with Balan Wonderworld the Naka of old is back, as is a brand of action that’s become increasingly rare. This is 3D platforming as you know and quite possibly love it from the turn of the century.

Not so much of a surprise, really, given that Balan Wonderworld marks the first collaboration between Naka and Naoto Ohshima, the artist behind Sonic the Hedgehog, since 1998’s Sonic Adventure. There’s an undeniable sense of Sonic Team in its 90s and early-00s pomp to Balan Wonderworld, and after a playthrough of the soon-to-be-released demo I’ve come to realise that’s no bad thing at all – it’s an enjoyably colourful and energetic antidote to the winter lockdown blues.

But there’s no getting away that Balan Wonderworld feels like an artifact from a different time – if you were feeling particularly unkind, you might go as far as to call it a bit of a relic too. It’s Nights Into Dreams that this venture at Naka’s new project at Square Enix leans into the most – the character of Balan themself looks like they may well have soared in from Nights Into Dreams’ heady fantasy, and indeed you’re even given the opportunity to play as Balan should you stumble across their trophy, though disappointingly it’s a simple QTE routine. In Balan Wonderworld, it initially seems the action is more akin to Nights Into Dreams’ more grounded moments, as you clumsily bound around with lead characters Leo or Emma Cole.