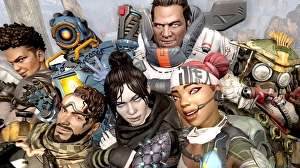 Apex Legends’ new Switch conversion may be one of the system’s most ambitious to date – but the severity of the cutbacks is clearly an issue. Much has been said about the game’s low resolution and the impact this has on visibility when targeting opponents at long range, but as our video head-to-head below reveals, the gulf in terms of visual features is tremendous, to the point where so many missing graphical elements may well have implications for the balance of the game when viewed through the lens of the CrossPlay feature.

In bringing Apex Legends to Switch, EA certainly chose a partner with pedigree – core porting work is carried out by Panic Button, riding high after the success of the excellent Switch conversion of Doom Eternal. But this is a title that represents a major challenge: it’s a game with a huge, detailed map, it’s a full-on battle royale with 60 players, and it’s running on Respawn Entertainment’s rendition of the Source Engine, never designed with mobile play in mind (though Source itself was ported to Android, with several Valve titles running on Shield Android TV using the same Tegra X1 chipset). The end result is perhaps inevitably, a highly pruned back experience – and it’s one where the specific presentation of CrossPlay brings the compromises into the harshest of focus. Put simply, when we start a party with one player on Switch and the other on Xbox Series X, we can allow one player to die, switch to spectator mode and see entirely like-for-like imagery. The differences can be astonishing – far more so than, say, Fortnite, where the same CrossPlay trick reveals much closer level of parity.

It’s worth pointing out at this stage that our tests are based on the 1.07 patch, which ‘dropped’ midway through production on this project – and it’s understood to have some performance advantages, which is reflected in our analysis. Resolution has been flagged as an issue and it’s certainly one of the challenges the game faces. We’re looking at a maximum 720p in docked play, with dynamic resolution scaling dropping to 1066×600 minimum, which is something of a struggle to parse. Portable play is 576p dynamic, with a 960×540 minimum, and a corresponding drop in the quality of texture filtering when stacked up against the docked experience. But that’s just the start of the feature culling: textures lose an immense amount of details, shadows are also affected, while draw distances are pulled in, obscured by fog (thankfully in a way that does not impact gameplay). Effects work is also pared back, with bandwidth-sapping transparency effects also running at a much lower fidelity. Trees and bushes are retained, but asset quality is lower here too. Incidental ground object detail is also massively reduced.