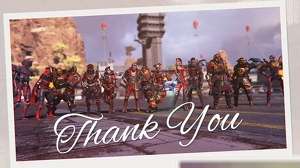 Apex Legends is celebrating its second anniversary this month, and along with releasing information about the game’s early development stages, Respawn is also introducing an anniversary collection event to the game.

To celebrate the anniversary, players will be able to earn 22 items, “including two event packs and ten apex packs”. Players will also receive five rewards for logging in the first time, although exactly what these are remains a mystery.

The event is also bringing back 24 skins that previously appeared in the game, with a splash of red and gold paint. Unlocking all of these will earn players 150 heirloom shards – although judging by previous collection events, this could be rather pricey.